Treatment of pathologies affecting the urinary system, adrenal glands and retroperitoneum and the male reproductive system.

The prostate is a gland the size of a walnut, located below the bladder. The main function is secretion of substances (prostatic fluid) that are part of the seminal fluid giving it greater fluidity, as well as facilitating passage through the urethra in ejaculation, serving also as nutrients for the sperm.

The prostate also secretes substances such as zinc, enzymes, organic acids and prostaglandins which have a mission of defence against infection and inflammation.

Up to puberty the prostate remains small and with no activity. During adolescence it begins its growth influenced by testosterone.

The prostate gland can present three types of pathology:

It is one of the most common diseases in males recurring to urologist consultation. In patients under the age of 35 it is caused largely by ETS, and above 50 years of age by germs commonly found in the lower urinary tract of infections in men. Prostatitis is grouped into a number of diseases affecting the prostate gland which can be either inflammatory or infectious, acute or chronic , and sometimes even non-inflammatory or infectious, but they all share a number of local symptoms including pain or discomfort in the perinea region, and the lower urinary tract is accompanied by burning urination, increased frequency of urination, urination difficulty, etc.. or sexual dysfunctions such as ejaculation pain, blood in the ejaculate, etc. 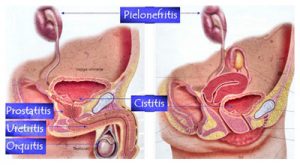 There may be complications such as prostatic abscess formation, orchitis.

a) Chronic Bacterial Prostatitis: presents recurrent urinary tract infection without fever.  Only occasionally it produces some symptoms. Persistent infection is diagnosed on urine cultures, resistant to the same bacteria. Antibiotic treatment is necessary  for 8-12 weeks. Is sometimes necessary to perform prostate surgery.

The prostate has two growth periods. The first occurs during puberty, when doubling its size. Then from 25-30 years of age it grows more slowly but progressively until the age of 75-80 years. This increase in size is known as benign prostatic hyperplasia and it explains the symptoms that appear (LUTS).

Prostate growth causes compression of the urethra and bladder neck, causing a decrease in the strength and flow of the urine stream. The bladder begins to suffer and becomes more sensitive and irritable so it has to be emptied out more often. By persisting obstruction, the bladder becomes unable to empty out  completely, urine accumulates inside, causing a feeling of incomplete emptying. 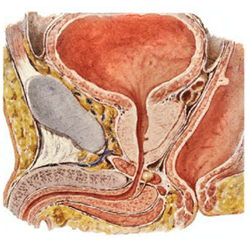 Although the vast majority of men are affected by BPH, only 45-60%  have symptoms that will make them consult a physician.

In Spain 10.500 new cases are diagnosed each year.

The World Health Organization (WHO) recommends annual prostate check-ups after age 45 and before age 40 if there are cases in the family history.

Predisposing factors have not been identified conclusively. There seems to be a clear relationship between fat intake and failure to include vegetables in the diet with a high frequency of Prostate Cancer. 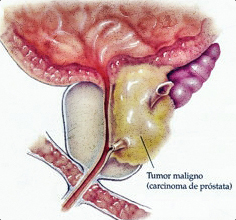 Urine infection (UIs) accounts for a major health problem because of high frequency (second only to respiratory infection), possible complications and long-term consequences. 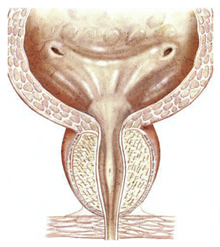 UI defines the presence, development and multiplication of microorganisms in urine (> 100,000 bacteria / ml of urine).

Cystitis is referred to as “uncomplicated” UTI. It is much more common in women. Symptoms include increased urinary frequency, urinary feeling of urgency, itching and feeling of incomplete urination, sometimes hematuria (blood in urine)appears .

Diagnosis is Microbiological, and treatment is antibiotic.

Over 60% women experience some urinary tract infection throughout their lives, often it is mild, with a limited clinical case therefore easy to treat. In women, almost all of these are limited to bladder infections and usually respond well to antibiotic treatment.

Thorough study is desirable in such cases and it is painstaking to discover the underlying cause of this disorder; only then good therapy is made possible.

UTIs occur most frequently in pregnancy, kidney stones, alterations in the normal anatomy of the urinary tract, diabetes or any other illness that reduces local and systemic defence of the patient. These circumstances not only facilitate the development of recurrent urinary tract infections but also involves complicated infections that require specialized urological care.

Bladder cancer has a high incidence in Spain with almost 10,000 new cases annually. It is the third disease in men and the tenth in women.

Risk factors are age and especially snuff, chronic cystitis, bladder stones and some substances such as hair dyes or paint.

Once diagnosed initial treatment is based on transurethral resection. The majority (80%) are superficial tumours, but 75% tumours recur after 5 years and it is very important to monitor postsurgical follow-up.

The range of therapeutic options in this disease is wide and varied, requiring a personalized and ongoing study.

This is the urinary tract infection reaching the upper urinary tract (kidney) causing a rapid clinical onset and severity characterized by pain: back pain, fever, chills, vomiting, accompanied by bacteria in urine and bacteraemia (bacteria in the urine).

95% pyelonephritis occurs ascending from the bladder.

Diagnosis is based on clinical symptoms, urine culture and ultrasound or intravenous urography. Treatment is done by making use of antibiotics and sometimes it has to be done in hospital.

Kidney cancer accounts for 3-5% of tumours. It has increased diagnosis due to wide use of diagnostic imaging methods (ultrasound, CT, MRI) that allows early diagnosis and sometimes incidental finding.

However almost a third presented metastases at diagnosis, or arose in the future.

The symptoms are variable, but often lack a specific clinical view. When hematuria, pain, etc appear usually they are already advanced cases. Early diagnosis is essential to employ healing techniques.

A relatively common condition in young adults, although some types are more common in elderly adults. 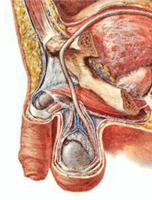 There are different histological types with multiple therapeutic and prognostic implications, many with specific handling after surgery.

As with any cancer disease early diagnosis is important. Self-examination is essential. In the presence of any lumps, new, painful spot or alteration of shape, size or testicular consistency, it is important to consult a urologist for an appropriate examination, it could simply be an inconsequential process or a tumour, in which case it is mandatory to act quickly and effectively.

Testicular ultrasound and a blood tests are sufficient for a reliable initial diagnostic approach.

Therefore, diagnosis and  initial treatment goes through testicular resection but in some cases, adjuvant chemotherapy treatment is applied with a very high cure rates. 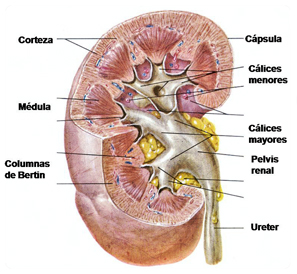